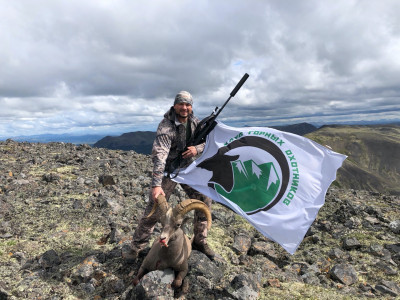 I've noticed that many hunters prefer to organize their hunting trips directly through the outfitter, the owner of hunting property and lands not through the agent. That was the reason why I took part in the auction for the hunting lands on the north of peninsula, near the border with Chukotka several years ago. The price hasn't been high because of the logistic scheme, what is difficult and long enough and I become the lessee of hunting ground for the next 49 years. The total square of my lands is more than 700K ha.

I began to count when took these lands. The right way is to count first and then to act. I haven’t time to think over. It’s as in a joke: I have no time to think, I have to shake. I was lucky because the last season proved my idea that I was right.

The total area is a terrain with a varied relief - there are also mountains, not as high and rocky as in central Kamchatka They are rather gentle, like hills. There are some valleys, where moose inhabitant. But moose hunting on the north of Kamchatka is prohibited. I could count on snow sheep only and bears less so. The bears dwelled on the north are smaller in size than their relatives from the central part and from the south/ and their number is small. It’s better to treat bear hunting as a way to get the additional trophy because of the complex logistic. I even don't know if it’s good or not. Why is it good? I could hardly protect those lands from poachers because there are not villages and I wouldn't have found the local staff to make it but the remoteness of that area resolved the problem. There is no necessity to do it. But I had some ideas how to get there with the client.

The hunting season this year has begun at the end of July. Thus, Sergey Razvizhin, one of the MHC members and I flew to Anadyr from Moscow. The local guide Ildar met us at the airports and we drove to change clothes. I’m was surprised that the place where we were going to change the civil clothes to camouflage, was so good that we could even spend a night there. But it was not necessary. We dressed and drove back to the airport where the chopper was already waiting.

You should know that the rent of helicopters is very expensive and I made the decision to organize hunting trips in that area following the principle of reasonable minimalism. Through trial and error, I have found the optimal formula for a hunter who is not afraid to be face to face with the wild. The first moment - The delivery to the place is by Robinson- the cheapest variant. The car is designed for three passengers, so we only fly together with the hunter - there are no cooks, camp workers and guides. I’m for all of them. The seat place is for our equipment.

There is no sense to land in the valley and then waste time climbing. We land on the ridge in the second part of the day. I studied the territory when flew over there in two last years and know where to look for sheep. 700K hectares is 70 by 100 kilometers, and you need to have a good idea of where and what can be found here.

Our landing was not the most successful. The low clouds in the departure day didn’t allow us to land where we had planned. The pilots offered to wait a couple days but I know that two days on Kamchatka can stretch into two weeks. We decided to fly the same day. But pilots were right. The highest mountains were covered by clouds and it was always constantly drizzling. So, we had to land below on the place where the helicopter could hang in the air not far above the ground without turning off the engine.

We threw equipment on the ground and waved to the helicopter pilots. When they flew away, we set two single tents, which became our camp for two days.

The only advantage of that place was that it was near the springs. There was no water on the tops and we should go down about 700-800m each time to drink if stayed there what was not comfortable. Usually, I take about 15 L of drinking water in the plastic bottles what is enough for 1-3 days of hunting.

We left all our equipment in the tents and went to examine surroundings to the end of the day. I’m use to go along ridges, it saves energy, I don't need to run up and down. There is a good view from the ridge You can see clearly the traces of animal activity on the nearest slopes. The experienced guide can know if the animals inhabitant in the area even if he doesn’t see them. He comes to such conclusions if see their paths trodden by animals, or their beds. He will understand how active the vital activity of the animals is.

Neither on the first day nor on the second day did we even see ewes with lambs. The tracks proved the idea that we should climb. We detected several bears but far from us and were not interested in them at all.

In two days, weather became better and we called to the helicopter pilots. I use Iridium phones; they have a navigation function. You send a point to the pilot, and he takes you where you are. But you should need to find a suitable place, since not even "Robinson" can land everywhere.

The new place was higher and better for hunting. We noticed the group of ewes with lambs when we flying. When the helicopter hanged above the ridge, the animals ran away, but as soon as it flew away, they calmed down and continued to graze calmly. It showed us that that area was absolutely wild and animals aren’t familiar with humans. I hunted in Tuva last year and saw how the herd of ibexes with kids ran away when heard the noise of helicopter somewhere.

We camped once again- set tents, watched the group of ewes and went to look for trophy rams. We were moving all the time along the ridge, periodically stopping to take some glasses.

We went about four km but spotted the group of bighorns. It was twilight when we approached them. Two of them had trophy sizes. Sergey decided to fire. He put his carbine 338LM on the bipods and shot. One of the rams fell down. The second one ran down. I must say that Sergey shoots very well and go in the mountains easily what is a rarity.

I had one more license which wanted to use myself and followed the male hoping that it’d stop. I use Blaser 300 WinMag. So it happened. It stopped for a moment, I fell down on the ground and prepared to shoot. The distance to the aim was 360m and it was lower than me. I use an inexpensive Winchestver cartridge with a bimetallic sleeve and a Ballistic Silvertip bullet. I entered all cartridge data from the Winchester company website into the Leica ballistic calculator. I shoot quite confidently at 500 meters. The ram stayed for a moment and moved down. The first shot hit its body and the second one made it to stop

It came not more than ten minutes between getting two trophies.

The first thing we did was take pictures with the trophies. Then we began to butcher the sheep.

It was totally dark when we finished. We took just one trophy and few pieces of meat but was going to come back next day.

The weather was fine and we called the chopper to take us back on the next day. All morning we were busy dragging to the landing place what we could not pick up yesterday. In the second part of the day, we said goodbye to the hunting lands that gave us two nice trophies.

We landed on the base, belonged to our friends i 300km from Anadyr. It is possible to use two bases - one in the form of a country house with all the amenities and a sauna, where we ended up. The next apartment is in the village Markovo. You can stay in both places if weather is bad to wait when it’ll change.

We put all meat into the fridge and next morning I was busy with the primary processing the trophies. I removed carefully and salted the skins and boiled the skulls.

Two days we waited for good weather and then flew to Chukotka region.

That time there were no adventures, flew out early and landed in a good place. We were on the dominant height, on the ridge, from which several other ridges diverged and we had the opportunity to explore a large territory without much hassle. We set the tents and left the equipment there. It was lunch time and sheep don't graze at those hours. I suggested to have lunch and go. I always take gas stove and sublimates to the mountains. It's necessary to eat hot meals when you are on the height. My usual choice is instant noodles, but not Russian. I prefer to buy Aptonia, thanks to Kazhym Dzhumaliev who has taught me. We ate, checked rifles and went to look for the trophy.

We detected more than three dozen of sheep but none of them had trophy size.

I didn’t remember how much time it took but we hiked about two km when detected the group of three rams. They were in 700 m from us and they all were about the same size but one of them was bigger. Those rams were older than the animals we met before. Sergey decided to fire. He was ready to shoot from 700 meters but we had the opportunity to approach. We descended from the ridge to the left and moved forward under the cover of the ridge so as to climb up the ridge again and be just above the rams. It was not far to go, but when we looked out from behind the ridge, it turned out that we were mistaken in the distances, or the rams moved away a little. There were about 200 between us. Sergey looked once again and said that he’d shoot without optics. The goat fell after the shot. I had not time to congratulate him when noticed the group of sheep in 300m from us. They ran and we saw the males with excellent horns.

What should we do? It was too expensive to get one more trophy. I had hunting licenses for my grounds but not for those area. How worried he was!

Then there was a photo session, butchering a ram...

At night we sat near the fire on the top of the mountain and talked. It's a pleasure to sit at night in good weather on the top of a mountain, when there is not a single person for hundreds of kilometers. But the most important thing, was that it was very comfortable to communicate with Sergei - this did not happen often.

It was not in vain that I participated in the auction...