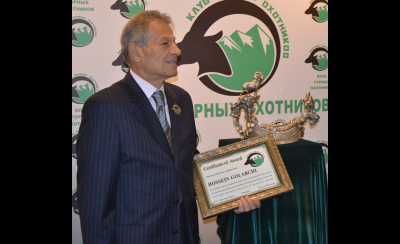 Hossein Goalapchi, known among all hunters as Sudi, passed away on January 22.

Sudi Golapchi was born in Iran where he started his hunting career at 16 years old. He remembered that being a boy, he had got there much more sheep than he had to because hunted for meat not for trophies.

In 1980, Sudi emigrated to the United States. Later he became the owner of the very successful company Golmar Construction and Development Co. in Augusta and became interested in trophy hunting all over the world. He got the collection of Grand Slams.

In 1990 he felt in love with hunting for Marco Polo in Tajikistan. Jury Matisson became his friend whom he visited several times in a year, flying to Pamir. There is not another man who has hunted for Marco Polo more than Sudi. Almost each year he got the argali with horns more than 60 inches!

At home, in Georgia he established the Museum where presented his trophy collection. It consists of about five hundred animals from all over the world which presents more than 200 different species.

Many hunters want to get high results in the trophy hunting but not all of them choose legal ways. But everybody who knew Hossein Golapchi confirm that he was exceptionally decent in this respect.

The CMH expresses its sincere condolences to the family, friends and acquaintances of Hussein Sudi Golabchi. We will remember his extraordinary personality and the memory of him will always remain in our hearts.