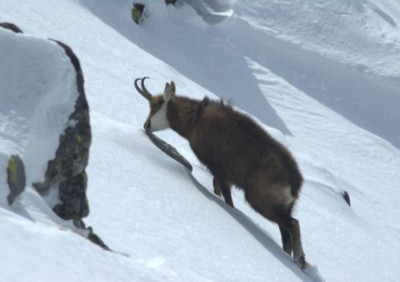 The existing two populations of the critically endangered Tatra chamois in Poland and Slovakia are living entirely in national park territories. Tatra chamois in the main distribution range are restricted to the Slovak and Polish side of the Vysoké Tatry Mountains (High Tatra Mountains) and the Západné and Belianske Mountains. In geographical terms this range represents the northernmost natural distribution limit of chamois. The second population occurs in Slovakia about 50 km (31 mi.) south from the High Tatra in the Low Tatra Mountains (Nízke Tatry Mountains) in and around Lomnistá Valley head and the Vajskovská Valley head. The two distribution areas are separated by a populated valley both deep and wide.

Average horn length is reported to be 23 cm (9 in.) with maximum lengths up to 26 cm (10 2/8 in.). Base circumferences average 8 cm (3 1/8 in.) with a maximum 10 cm (3 7/8 in.); average height is 15 cm (5 7/8 in.). Two chamois heads harvested in 1921 probably originate from the High Tatra (Csorba/Štrba) are in the possession of the Orleans Collection in France. The Catalogue of the 1937 International Hunting Exhibition in Berlin shows another three specimens (page 419), without giving detailed measurements. The CIC point values for three specimens range between 109 and 111.

Tatra chamois is fully protected and cannot be hunted. A small population of Alpine chamois which has been introduced in the Fatra Mountains (Slovenský raj and Gaderská Dolina) can be hunted, and is frequently offered to hunters as hybrid of Alpine and Tatra chamois. However the Slovak Hunting Union has confirmed (2014 and 2015) that this hunted population consist entirely of pure Alpine chamois; hybrids have not been reported at all.