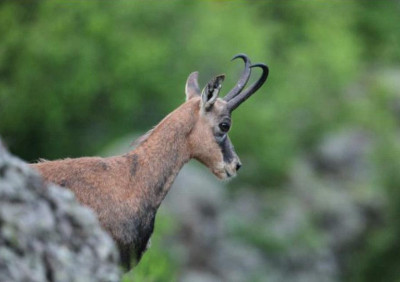 Balkan chamois occur as indigenous populations, often transboundary, in Serbia, Bosnia and Herzegovina, Montenegro, Kosovo and Macedonia throughout the north-south extension of the Dinaric Alps and their sub-ranges on the Balkan Peninsula. In Albania, they are present in the north, northeast and in the southcentral districts. In Kosovo they occur in Šar Planina National Park and the Albanian Alps. In Montenegro, the major, mostly transboundary, Balkan chamois populations occur on Durmitor Mountain, Prokletije Mountains and on Komovi Mountain. The major chamois concentrations in Macedonia are located in the complex mountain systems of western and central Macedonia. In Serbia the only native Balkan chamois population persists in Tara National Park. Djerdap National Park northeastern Serbia, along the Rumanian border) and Zlot hold introduced populations. Apart from shared populations with neighboring states in the mountain systems mentioned above, there are no exact details about the ranges of Balkan chamois in Bosnia & Herzegovina and Montenegro. The distribution range extends into Bulgaria in the Balkan Mountains and the Rila and Pirin Mountains, as well as in the Rhodope Mountains which extend into Greece. Several populations in Bulgaria are threatened by hybridization with Alpine chamois. The total numbers are probably around 9,000 individuals, and at least ca. 300 Balkan chamois are harvested legally annually. In Albania and Greece they are protected, and Montenegro introduced a hunting moratorium for Balkan chamois. In the other range states they can be hunted. Bulgaria is the only country with a Balkan chamois Action Plan. The introduced chamois in Croatia along the Croatian Adriatic coast between Senj and Makaraka are of unknown genetic origin, and are possibly Alpine/Balkan hybrids. The native chamois from the Croatian Gorski kotar are pure Alpine chamois.