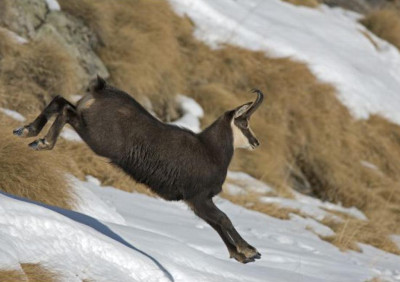 The Alps across France, Italy, Switzerland, Liechtenstein, Germany, Austria, and Slovenia, are the home of the Alpine chamois, the most abundant and widespread Caprin, with an estimated total population between 508,000 and 535,000 individuals. They occupy most of the suitable habitats in the Swiss, Austrian, French, German and Italian Alps. Alpine chamois are also widespread in the forested regions of the Swiss and French Jura and smaller pockets in the Vosges Mountains and Massif Central. A viable introduced population inhabits the Black Forest. Small introduced populations also exist in the Czech Republic and Slovakia (Low Fatras/Slovenský raj). Slovenia has sizeable populations in the Julian Alps. In northwestern Croatia, they occur on the border with Slovenia and a hybrid population of R. r. balcanica x rupicapra has evolved from introductions in the southwest. Alpine chamois have been successfully introduced to the Southern Alps of New Zealand from north-west Nelson to northern Fjordland. They continue to expand their range to the north and south of the island.