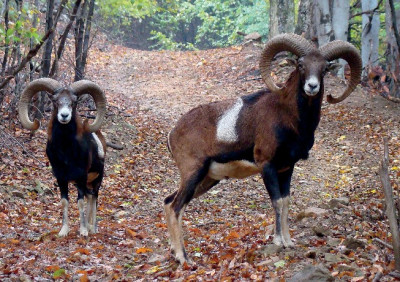 Introduced Europeanmouflon can be found, usually in disconnected populations, all over Europe with a total population that probably exceeds 100,000 individuals.  During the last 250 years Tyrrhenian mouflons were used as founder stocks for introductions into new habitats in Europe. Descendants of these introduced populations were used for further introductions throughout continental Europe and later for the establishment of populations even in Africa, North and South America, Australia and to Hawaii and the Kerguelen Archipelago in the Indian Ocean. Outside Europe the vast majority of introduced mouflon are held in escape proof enclosures although a few free-ranging populations (e.g. Hawaii and Kerguelen) have been established. The degree of hybridization and breeding manipulation, as well as frequent captive rearing of mouflon rams to “produce high scoring trophies” has cast a shadow over many mouflon hunting trophies. Many so-called record trophy rams may owe their extraordinary horn development to bastardization with various breeds of domestic sheep like the Racka sheep of Hungary or the German Heidschnucke; some authors even report the use of wild and domestic Asiatic sheep.Hence, there are considerable differences in horn morphometry throughout the European mouflon populations.
Two main, entirely different horn configurations are apparent in mouflon rams, but many intermediate forms exist. The first is the original homonymous configuration inherited from the endemic Corsican and Sardinian populations with the basic growth pattern that is either converging or parallel with a relatively narrow tip-to-tip spread when compared to greatest spread. The second configuration has a distinct heteronymous horn curl. In these diverging horns the tip-to-tip spread is equal to the widest spread and horn tips are always pointing outwards. The latter configuration points towards hybrid origin and influence of domestic and/or Asiatic wild sheep bloodlines.
Generally the horns of mature rams measure between 71 to 81 cm (28 to 31 7/8 in.) with basal circumferences between 18 and 24 cm (7 1/8 and 9 4/8 in.); but horns measuring 90 to over 100 cm (35 3/8 to 39 3/8 in.) in length, with bases of 27 to over 29 cm (10 5/8 to 11 3/8 in.) do occur in favorable habitats. Mature well developed rams usually show a tip to tip spread of 40 to 45 cm (15 6/8 to 17 6/8 in.). Ewes often do not carry horns, but there are individual populations, where a good percentage of ewes are horned. Thousands of mouflon trophies have been evaluated within the different scoring systems. In Europe, national European hunting associations and government management authorities in Central Europe, the French AFMT, the Spanish JNHT and others use exclusively the CIC mouflon evaluation method, which is significantly different from those of SCI and Rowland Ward. Mouflon hunting is popular throughout the distribution range and permitted in all range countries.