The cup of the mountain hunter CMH 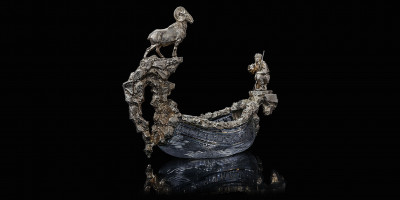 The shape of the cup is not occasional, it has the traditional Russian form of the scoop, which was typical for the masters of the Russian school of the jewelers in the beginning of the XIX and ХХ centuries and suppliers of the Khlebnikov, Ovchinnikov Emperor Palace. The scoop, as a embassy or emperor gift erases to the traditions of the Russian loving cup. The bronze composition of the Russian cup of the mountain hunter is created by the sculptor Vladislav Maslov from the Saint-Petersburg.