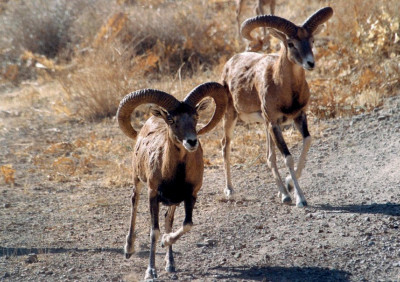 The distribution range extends from the eastern through the central Alborz and ends in the west approximately at the Sefid-Rud River in the Manjil Gap. The core ranges are in the provinces of Tehran, Mazandaran, Qazvin, the western third of Semnan and extending into Qom. In eastern Iran the range overlaps with the Transcaspian urial; in the western Alborz with the Armenian mouflon.The exact western, eastern and southern limits are undetermined.  An isolated population exists in the Kavir Desert (Siah Kuh Range); the Kavir sheep could be a sub-type of the Alborz red sheep.
The horns of Alborz red sheep rams display variable forms (supracervical, homonymous and intermediate types). In the northeast and the Kavir Desert horns are sometimes similar to the urial, in the west south sometimes similar to the Armenian sheep (supracervical/perverted), occasionally also of an intermediate type with horn tips growing toward the neck. The horns measure on average between 61 to 76 cm (24 to 30 in.) in length with a circumference at the base between 20 and 25 cm (7 6/8 to 8 6/8 in.). We have analysed the measurements of 224 rams listed in SCI and Rowland Ward, which resulted in a mean length of 72.4 cm (28 4/8 in.) and a mean basal circumference of 24.1 cm (9 4/8 in.). The ram with the longest horn (1977) measured 95.3 cm (37 4/8 in.) with 24.1 cm (9 4/8 in.) bases. The longest recorded horn of the Kavir ecotype measured 89 cm (35 in.). The tip-to-tip spread is, as to be expected, very variable and specimens with 10.5 cm (4 1/8 in.) distance between the tips have been recorded, but also some with spreads up to 57.5 cm (22 5/8 in.). The mean of 86 recorded tip-to-tip spreads stands at 32.7 cm (12 7/8 in.). Hunting is temporarily closed in Iran.