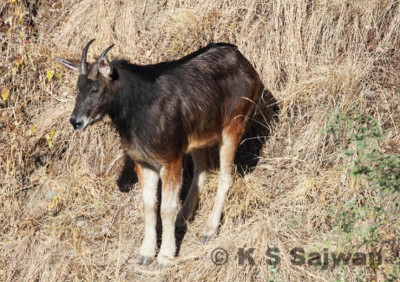 In Xizang (China), the Himalayan serow occurs on the southern slope of the Qomolangma Shan (Mount Everest), where it inhabits the forest belt between 2,000 and 3,000 m in the lower Pungchu Zhangmu and Kyirong valleys in and around Qomolangma Feng National Nature Reserve, at the border with southeastern Nepal. A population is found also in the subalpine forests in the narrow area east of the Big Bend of the Yarlung Zangbo River (upper Brahmaputra). The Himalayan serow is wide-spread throughout the forested mountain slopes of Nepal. It is also found within the Annapurna Conservation Area, and in Dhorpatan Hunting Reserve. The species probably occurs in Parsa Wildlife Reserve, and possibly also in Bardia National Park. For Bhutan, almost nothing is known about its distribution other than that it may exist in subtropical and temperate zones. It has been recorded in the Royal Manas and Jigme Singye Wangchuck National Parks. In India it is widespread but sparsely distributed throughout the forested southern Himalayan slopes in all Himalayan states from Jammu and Kashmir to the Mishmi Hills in Arunachal Pradesh. A reddish colormorph apparently occurs in India, southeast of the Brahmaputra River, in hilly tracts in Assam, Meghalaya and Tripura and may also occur in Myanmar (western Sagaing State) along the Upper Chindwin River. There is uncertainty whether these animals really represent a color morph only, or may even be a new serow subspecies or even species.